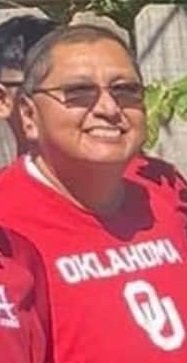 Funeral services for Tracy Lynn Jessie, 61, of Ardmore were scheduled for 10 a.m. Tuesday, May 17, 2022, at the First Baptist Church of Frederick, with Brother Jeff Jessie, Rev. Tim Billy, and Rev. Les Banks, officiating.

Burial was set in the Frederick Memorial Cemetery under the direction of Orr Gray Gish Funeral Home.

Visitation was scheduled for 6:30 p.m. Monday at the funeral home.

He was born June 14, 1960, in Lawton to Harry and Rubye Louise (Parker) Jessie. He attended Frederick schools for all 13 years and graduated from Frederick High School with the Class of 1978. He enjoyed playing football in school and proudly wore the Bombers #60 jersey. After high school, he worked on wheat harvests. He lived in Frederick and then in the Dallas area briefly before moving and settling in Ardmore over 30 years ago. He started working in carpentry and became very proficient as a woodworker, especially cabinetry. He recently worked at Atwoods and also in various capacities for Sunshine Industries, a service program providing people with disabilities the opportunity to work and live as independently as possible. He was an avid sports fan and enjoyed coaching baseball and softball. He was a fanatic football fan supporting the OU Sooners in college football and he also loved the Pittsburgh Steelers in the pros. He enjoyed shooting pool or playing billiards.

An online guest book and sympathy cards are available at www.OrrGrayGishfuneralhome.com.