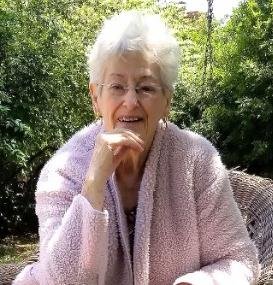 A Celebration of Life for Sandra Su Clifton, 89 of Frederick, was scheduled for 10 a.m., Friday, March 11, 2022, at the First United Methodist Church, 12th & Grand, Frederick, with Eric Gaston and Finn Foster, grandsons, officiating. Burial was set to follow in the Frederick Memorial Cemetery with services under the direction of Jackson Funeral Home.  Mrs. Clifton passed away Saturday, March 5, 2022, in Lawton.

Sandra Su (Dobbs) Clifton was born May 24, 1932, at home in Davidson to Luther C. and Walsie (Willis) Dobbs.  She attended Davidson Public Schools, graduating from Davidson High School in 1949.  Su was always proud to be a Davidson Sandie. She later attended Cameron State Agriculture College in Lawton, Oklahoma.  On Dec. 15, 1951, she and the love of her life, Kenneth Lee “Buck” Clifton were united in marriage at Snyder.

Su loved Jesus. She got the best man in the world for a husband, and she had two daughters who loved and admired her and looked up to her more than anyone else in the world. She had sisters she loved to be with and have fun with who felt the same about her. Her daddy named her (insisting on Su with no "e"), and her mother once whispered to a friend, "Su can do anything." She was smart and witty and contrarian. She had all the best ideas for how to make an event fun or a gift special.  People still talk about (and have) graduation gifts she personalized just for them.  She could tell a joke. You could hear her whistle from blocks away. And she was always ready to help you name your baby.

First United Methodist Church of Frederick was as important to her as just about anything else in her life. She sang in the choir (from where she could raise an eyebrow at anything Merrily and Marta were up to, or Buck). She served on likely every committee and became famous for her coffee bar. She loved buying cards for everyone to sign for church members who were sick or in the hospital or just needed encouragement. She loved all the little kids. She was the hands-down favorite MYF cook; attendance soared on the Sunday evenings she was in the church kitchen.

Su was the original supermom. She went back to work full time when Merrily and Marta were both in school. She was one of Frederick's first teacher's aides, working first at Whittier Elementary and later as a secretary to her beloved Mr. Williams. She went to work for First National Bank a few years later, starting as a teller and retiring as a Vice President. She loved to work so much that, after retiring from the bank, she worked for several years at KC's and Jackson Funeral Home. Both jobs gave her the chance to bless others with her creativity and artistry and gift for making everyone feel welcome and wanted. She continued working with Bobby and Georgia as long as she could, leaving only when she felt like she couldn't give them her very best. And in all those years of working, everyone at home got everything they needed and more. The house remained spotless, every room with clever and unique touches. The girls' clothes fit to a T. Buck's hair was combed and set and never out of place. No TV dinners were served.

Every Christmas brought a new Christmas tree theme. Sidney, Eric, Haley, and Finn grew up knowing no other (or better) way to spend Christmas Eve than sequestered upstairs at Su's house reading the letters to Santa in the Frederick Leader. They loved their grandmother on all holidays, but they were well into adulthood before they considered spending Christmas anywhere else or with anyone else but Su.

She loved the Bombers. She watched the girls and boys play in this year's district playoffs on the computer and listened to the regional games on the radio. She went to every game she could for as long as she could, partly to maintain Jayme's and her superfan status but mostly because she just loved it. She was cheering for them to the end.

Su loved to go places, to just get in the car and start driving and see where she ended up. A lot of times it was her beloved Wichita Mountains, and sometimes it was just a tour of Tillman County on all the dirt roads. But she was also known to have stopped at host house one day with a suitcase packed, where she and Margaret labeled slips of paper north, south, east, and west, then drew one, then ended up in Sturgis, South Dakota, during a time of year famous to many but not to them. And that wasn't even the most interesting part of the trip.  She had no interest in planning, and that includes this final journey. She never quit on anything in her life, least of all life itself.

Devoted daughter, sister, aunt, wife, mother, grandmother, and great-grandmother. Su also had thousands of friends in her life and, being blessed to live a long one, was crushed every time one of them passed on before her. As tricky as it is to mention some but not all, Merrily and Marta thank Shirley Mahanay, Cathy Riggins, and Kathryn Fate for their true friendship, and all her lovely neighbors on 18th Street and friends at FUMC Frederick. They also want to thank Red River Transportation and all the drivers for taking such good care of Su during her trips to Lawton, especially for always having the van nice and warm.  Special thanks also to the nurses and techs at Sooner Dialysis and in the Emergency Department and ICU North at Comanche County Memorial Hospital, and to Dr. Sikora, Dr. Sherchan, Dr. Perez, and Dr. Leach, who helped Su and Merrily and Marta navigate the last hours of Su's earthly life with deep compassion.

She is survived by her two daughters, Merrily Gaston of Stillwater, and Marta Gay Foster of Irving, Texas; one sister, Jayme Dobbs Culbreath of Frederick; four grandchildren, Sidney Lee Gaston and his wife Paige of Tulsa, Eric McKinley Gaston and his wife Ashley of La Grange, Texas, Haley Jill Richardson and her husband Max Willens of Philadelphia, Pennsylvania, and Finn Christy Foster and his wife Shanelle of Durango, Colorado; four great-grandchildren, McKinley Grace Gaston, Royce James “Rocky” Gaston, Beau Ryan Gaston, and Kenna June Clifton Willens; and her beloved nieces and nephews, Steve Qualls and his wife Toni, Sue Ann Kauffman, Stuart Wright and his wife Lyn, Jan Lane and her husband Fred, Linda Whitworth and her husband Phil, and Charles Culbreath and his wife Michell; and a host of great-nieces and nephews.

She was preceded in death by her parents, Luther and Walsie Dobbs; her husband, Buck Clifton; her sisters, Lutherine Dobbs Wright and her husband Tom, and Margaret Dobbs Qualls and her husband Allen; a brother-in-law, Joe Culbreath; and a brother, Gerald Vance Dobbs.

Memorial contributions may be made to the First United Methodist Church, or to the donor’s choice in memory of Sandra Su Dobbs Clifton.